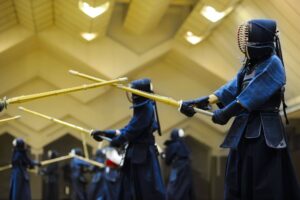 In the extra-curricular activities of Japanese junior and senior high schools, there are various clubs. Such activities are called “bukatsudo”. Participation is voluntary, not compulsory, however, most students belong to a club.
Clubs are broadly divided into two categories—sports clubs and culture clubs, and there are various kinds within each category. Clubs range from those which are enjoyed casually once or twice a week, to tough clubs which meet not only almost every day after school, but also on holidays, with students going to school just to participate in the clubs to prepare for national competitions, etc. The frequency and content of the activities vary depending on the club.
Each club has a supervising teacher, but emphasis is placed on student independence. In the Ministry of Education, Culture, Sports, Science and Technology educational guidelines for junior and senior high schools, it says that students are to participate in club activities independently and voluntarily.

1）Over 70 kinds of sports and culture clubs combined

The “FY 2017 fact-finding survey regarding sports club activities, etc.” conducted in 2017 by the Japan Sports Agency mentioned the main kinds of sports and culture clubs in junior and senior high schools. There were 47 kinds of sports clubs, and 26 kinds of culture clubs. However, not all of the clubs are established in all schools. The figures show how many kinds of clubs there are in total.
In both junior and senior high schools, sports clubs which are often established include table tennis, track and field, baseball, basketball, tennis, soccer and volleyball. There are prefectural and national tournaments for many of them. Of these, the national tournament for high school baseball is broadcast live on television every year, and constantly boasts a high audience rating. Many students are noticed in the tournament and become professional players. One such player is Shohei Ohtani, who plays in the Major League in the USA.

In addition, there are also martial arts clubs, which practice Japanese arts. Many schools have kendo, judo and kyudo clubs, and there are also schools with karate, sumo and aikido clubs.
Culture clubs that are often established include brass band, art, craft, chorus, theater and pop music. In junior high schools, the kinds of culture clubs are few overall, however, there are many senior high schools with traditional Japanese culture clubs, such as flower arrangement, tea ceremony, and calligraphy. Many senior high schools also have literature, manga, anime, and volunteer clubs, and the variation is quite wide.
Generally, sports clubs meet more often than culture clubs, and practice more, however, there are some culture clubs which meet often and practice a lot, such as brass band, theater and chorus clubs which enter prefectural and national tournaments.

2）Club activity participation trends – in senior high school, there is an increase in culture club participation or students not belonging to a club

The Japan Sports Agency fact-finding survey mentioned above surveyed the junior high and senior high club activity participation status. According to the findings, the number of students participating in multiple clubs was small, and generally one student belonged to one club.

3）An ideal opportunity to learn teamwork and traditional Japanese culture

Even so, there are many advantages to participating in club activities.
It is said that Japanese clubs are “a part of education”, and from this perspective they are unique when compared to club activities overseas. Learning teamwork and cooperativeness is a factor common to both sports and culture clubs. In particular, sports clubs have a strict vertical hierarchy, and are useful in mastering greetings and manners. It has been pointed out that junior and senior high school club activities have influenced the way Japanese companies work, with respect for seniors and emphasis on harmony.

Compared to sports clubs, the vertical hierarchy of culture clubs is not as strict. They are places where like-minded students can improve together and expand their creativity.
Clubs which practice traditional Japanese martial arts and culture, such as kendo and judo sports clubs, and flower arrangement and tea ceremony culture clubs offer a precious chance to learn the traditional arts firsthand. It is said that, by experiencing such arts in the sensitive teenage years, the effect of passing traditional Japanese culture to the next generation is large.