Asahi Municipal Higata Elementary School made a video in which homeroom teachers appeared, and students reflected on how to eat school lunches.
Specifically, two teachers were filmed eating school lunches. One of the teachers chewed the food well, while the other teacher ate without really chewing. After watching the video, the students were asked to think about the reasons why it is better to chew well. They were told that they could understand the tastiness, that it helped with digestion, and that it led to a boost in memory. The students could participate in the lesson with interest, because their homeroom teachers appeared in the video.

Next, the students were given small rice balls to eat. By chewing well, they could experience the changes in the mouth. When they chewed well, the food mixed with saliva, they could enjoy the tastiness, and could understand that it helped digestion. They were shown a thermal image of the differences in temperature of the cheeks and temples when chewing pudding and dried squid, and were told that the improvement in circulation led to enhanced memory.

So that the students could enjoy watching the video, an original character puppet appeared, who the students could learn together with. Asahi City boasts one of the largest production volumes of pork in Japan, so to have students feel a connection with local industry, a pig was used as a character.

The video contained the following contents: 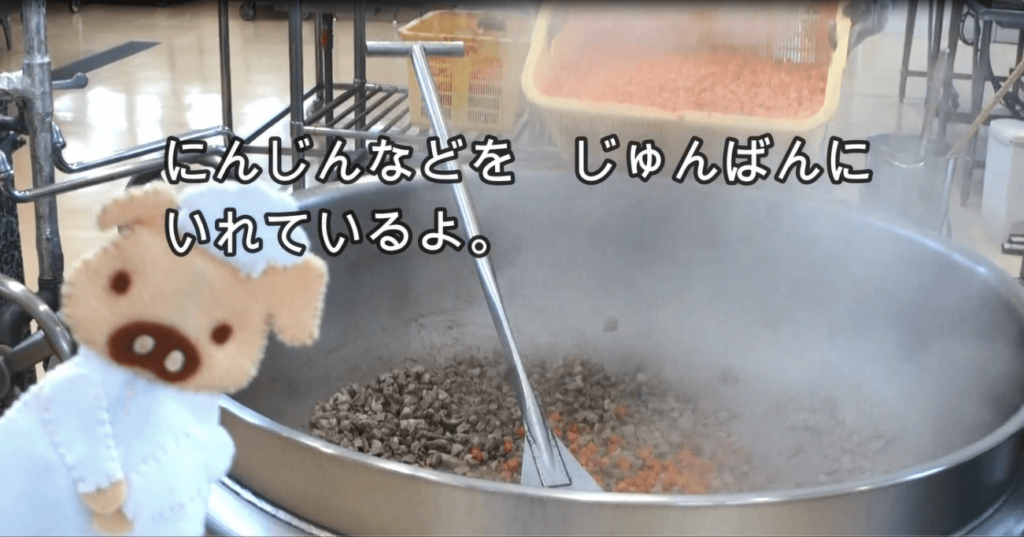 Results of the initiative

As a result of such kind of initiative, efforts to master better habits when eating were seen among the students.
In the questionnaire which followed the practical lesson using ICT, 100% of students said that they “like school lunches”. The number of students who responded that they “finish the meal 3-4 or more times a week” climbed to 78%. In the questionnaire which followed the school lunch instruction using the material video, there were positive answers from students, with 87% saying “the school lunch video was good”, and 89% saying “I want to watch the video again”.

In Asahi City, they are planning dietary education which can be conducted because of the COVID-19 pandemic, and working to nurture children who enjoy school lunches.