The Japan National Tourism Organization (JNTO) conducted a questionnaire survey of organizations and bodies (such as prefectural or local body tourism departments, and tourism promotional bodies) throughout Japan that accept educational travelers regarding such accepting in FY2018 of Japan-bound educational travelers. Responses were received from 42 of the 49 of the organizations/bodies surveyed. The results were then compiled, with the findings announced publicly on this page.

The survey responses are based on information as perceived by the respondents, and therefore may not accurately reflect the circumstances with regard to acceptance in each region.

1.No. of days required between application for school exchange and acceptance of students

With regard to school exchanges conducted in conjunction with educational travel to Japan, we asked about the minimum number of days between the application for a school exchange and the actual acceptance of the students. 30 days or less accounted for 10% of the responses, 31-60 days for 38%, and 61-90 days for 29%. So around half of respondents said at least one or two months were needed.

If an application is made less than 30 days before the start of the educational travel to Japan, then even if a school that will accept the students is found, sitting in on lessons is the only form of exchange that happens in almost every case. To put together a range of exchange activities after careful planning, early applications are important. JNTO recommends that applications to organizations/bodies are made at least two months in advance. 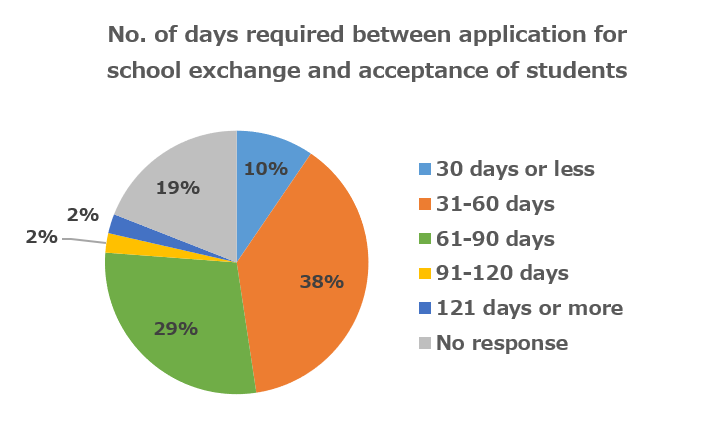 Regarding the average time period per day for school exchanges, 50% of exchanges lasted two to four hours, so half a day or less, while long exchanges lasting five to six hours accounted for less than 40%. It seems that long exchanges organized at the request of the visitors have become more common in recent years, even though long exchanges add to the burden placed on the accepting schools. 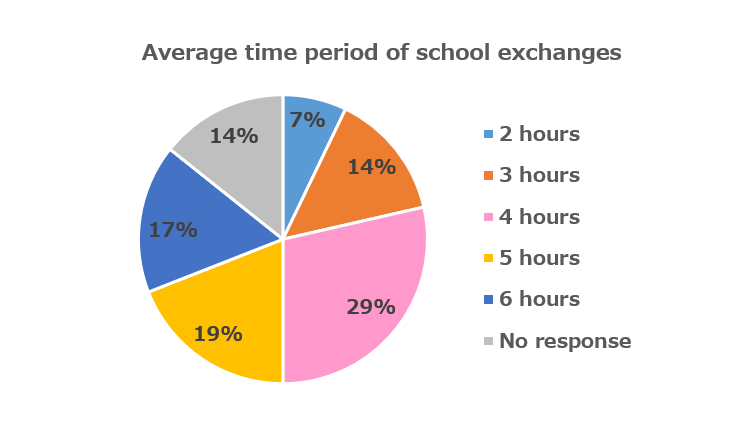 Exactly half the organizations/bodies said that they have a dedicated application form for applying for school exchanges. By having a dedicated form, criteria for requesting an exchange can be clarified and the mismatching of schools and visitors can be reduced.

Over 60% of organizations/bodies said that they have set certain criteria for matching in the case of school exchanges. Specific criteria included staying or sightseeing in the prefecture being included in the itinerary, requesting matching at an early stage, and having already booked flights and accommodation.

In response to the question of whether applications could be accepted if the party wished to stay in a minpaku (private residence that accepts temporary paying guests), more than 80% of organizations/bodies said that they could. Although a lot of visitors wish to stay in minpaku, there are differences from region to region in systems for accepting them.

In response to the question of whether they performed matching for university students, approximately 60% of organizations/bodies said that they could. Regarding exchanges with university students in Japan, the high degree of difficulty in matching students is a problem. The goal is often to obtain employment in Japan or gain admission to a Japanese university or graduate school, so the requests from the visiting sides tend to be detailed. For example, they often specify the level of university, the majors of the students, and so on.

Over 85% of organizations/bodies said that they accepted inspection tours for educational personnel. At the schools toured, the visitors observed lessons, the behavior of the children/students, and so on, and sometimes negotiations about school exchanges also take place during these visits. And in recent years, in particular, the number of requests to tour Super Global High Schools (SGHs), which have been designated by the Ministry of Education, Culture, Sports, Science and Technology for the purpose of developing people who can succeed in international society, have been increasing.

8.Problems with acceptance of educational travel to Japan and school exchanges

Regarding problems with acceptance, various opinions from different regions were expressed, but the following three problems were common nationwide:

Although circumstances differ depending on the countries or regions of the visiting schools, there are numerous cases of slowness in making educational travel plans and arrangements themselves, and lateness in requesting school exchanges. This is a huge problem, as it makes matching difficult and can lead to an increased burden on the accepting schools.

Many respondents described problems such as school exchanges being canceled due to the circumstances of the visiting school, or not being canceled but the number of participants or the nature of the exchange being altered at short notice, for example.

Periods when exchange matching is difficult

Some respondents also said that there are periods during which it is difficult for Japanese schools to accept visitors, such as during the summer vacation and at the start and end of the academic year. There are apparently also periods during which requests to visit from certain countries and regions are concentrated, which makes coordination difficult.